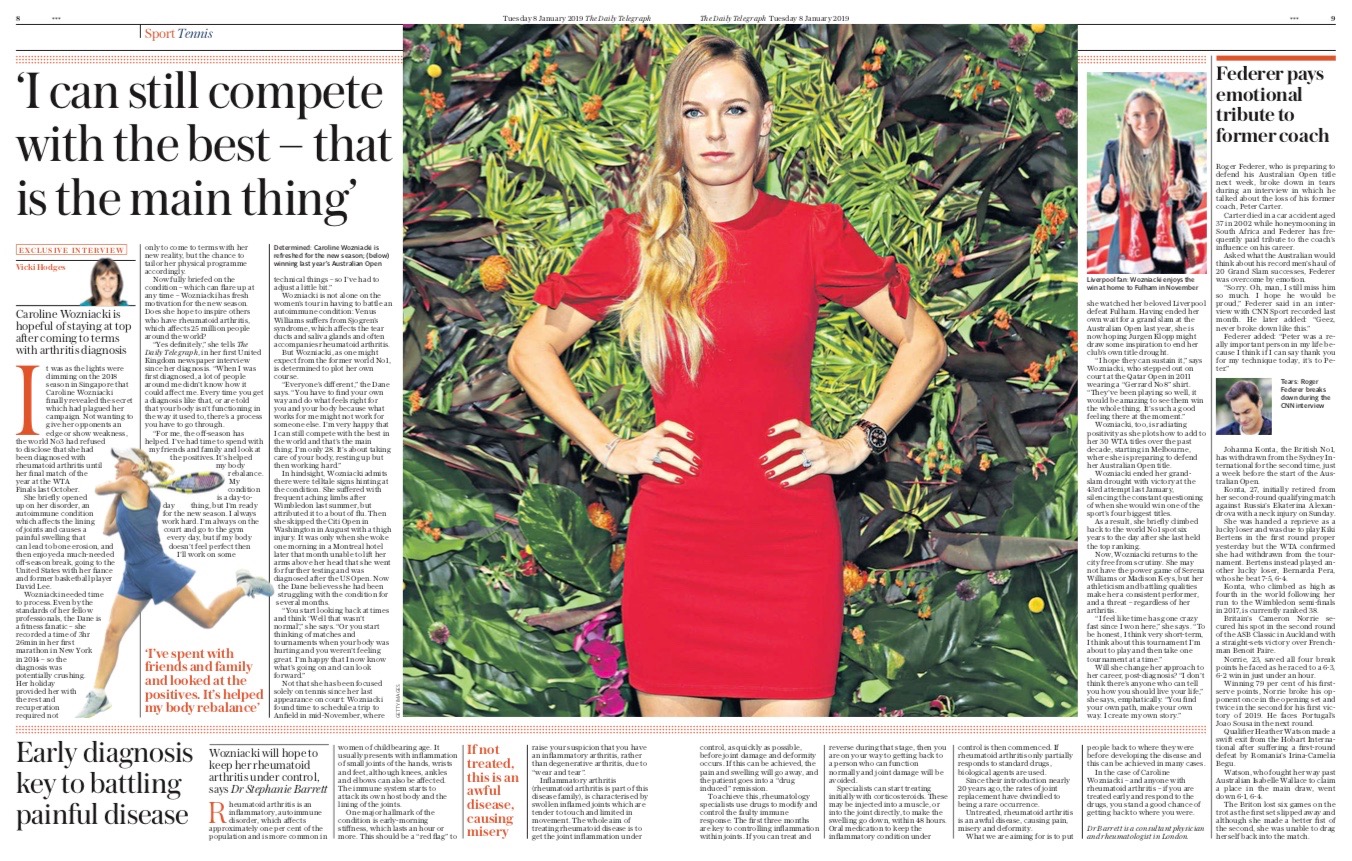 To read the article in The Daily Telegraph please go to:

The full interview can be found below…

Rheumatoid arthritis is an inflammatory, autoimmune disorder, which affects approximately one per of the population and is more common in women of childbearing age.

It usually presents in a symmetrical fashion, with inflammation of small joints of the hands, wrists and feet, although any peripheral joint may be affected eg knees, ankles, elbows etc. The immune system literally starts to attack its own host body, and the ‘target tissue’ is synovium, the fine cellular lining of the joints, rather than the bones themselves. The attack causes fluid, inflammatory proteins (signalling molecules) and defence white cells, to be drawn into the affected joints, and the fine synovial lining started to layer up. This causes joint swelling, pain and reduced movement. It appears to be a faulty defence mechanism, which fails to switch off.

One major hallmark of the condition, is early morning stiffness, which can last for an hour or more. This should be a ‘red flag’ to raise your suspicion that you have an inflammatory arthritis, rather than degenerative arthritis, due to ‘wear and tear’. Degenerative arthritis generally gets worse towards the end of the day, movement and weight bearing.

Inflammatory arthritis (rheumatoid arthritis is part of this disease family), is characterised by swollen and palpably inflamed joints, although not always, which are tender to touch, stiff and limited in movement.

The whole aim of treating rheumatoid disease is to get the joint inflammation under control, as quickly as possible, before joint damage and deformity occurs. If this can be achieved, the pain and swelling will go away, and the patient goes into a ‘drug induced’ remission. The doctor will tailor the drug treatment to achieve the least possible joint inflammation, and try to return the patient’s joints to the level of function that was present before disease onset.

To achieve this, rheumatology specialists, use drugs to modify and control the faulty immune response, The first few months are key, to control inflammation within joints. If you can treat and reverse that stage, then you’re on your way to getting back to a person, who can function normally, as they did before they got the arthritis and joint damage will be avoided. This is the goal with everyone.

Simple blood tests, such as inflammatory markers e.g. a CRP (C-reactive protein test, showing the level of inflammation) and anti-CCP antibodies/ rheumatoid factor can be very helpful to make the diagnosis. However, some sufferers show normal results in the early stages, which is where clinical expertise, from a Rheumatologist and doctors experienced at seeing the typical RA ‘picture’, is invaluable.

The other quick and helpful test is to use ultrasound scanning on the affected joints. Ultrasound is very sensitive and accurate at picking up early disease, and is non invasive. These tests may be requested from your GP if the symptoms and signs fit with the pattern of RA. Once these have been carried out, or if there is strong clinical suspicion, urgent referral into an ‘early inflammatory arthritis clinic’ should be made by your GP. The early inflammatory arthritis clinics will aim to see suitable patients within 3 weeks of referral.

Once diagnosed, act quickly. Specialists can start treating initially with corticosteroids, which are incredibly important in the early stages of the disease to damp down the huge inflammatory response, rapidly. These may be injected into a muscle, or into the joint directly, to make the swelling go down, within 48 hours. Oral medication to keep the inflammatory condition under control, is then commenced. Corticosteroids are used very sparingly but to good effect in the early stages. It is crucial to hit the disease hard at the beginning, achieve control then use maintenance medication.

Standard medications include methotrexate, hydrocychloroquine and sulphasalazine. These take much longer to take effect than the corticosteroids, used in the initial stages and weekly methotrexate is one of the key drugs used in gaining remission from symptoms and disease activity.

If RA only partially responds to standard drugs, biological agents such as adalimumab and etanercept, are used. These act at a much deeper cellular level, to switch off or block the specific inflammatory cytokines (signal molecules), which are part of the inflammatory attack and subsequent pain and swelling. These drugs are usually self injected (under the skin), once a week or every fortnight. The biological drugs have revolutionised the lives of patients with RA. Since their introduction, over 20 years ago, the rates of joint replacement, previously a necessity in most patients with RA have dwindled to being  a rare occurrence.

Untreated RA is an awful disease causing pain, misery and deformity. It appears out of the blue and may affect children and people of any age. However, there is a preponderance of females of childbearing age.

The newer biological drugs are truly revolutionary and provide such hope for sufferers of the condition. The key to success in treatment, is early detection. This cannot be overemphasised. This will occur if both patient and general practitioners are aware of the unusual symptoms and appearance of RA. Simple blood tests such as a CRP, anti CCP antibodies and rheumatoid factor are easy to perform and cheap to order. The ultrasound test to view the interior of the joints is also accessible, through the general practictioner referring to a local radiology department.

If in doubt, Early Inflammatory Arthritis Clinics, (locations may be searched on the internet) will aim to see potential RA sufferers  within three weeks and many do not require previous investigations to be carried out.

What we’re aiming for is to put people back to where they were before developing the disease and this can be achieved in many cases.

There can be delays in diagnosis because of the lack of awareness of the presenting signs of RA in both the public and general practice. It is so different from osteoarthritis but so often ‘arthritis’ types are just lumped together in a ‘wear and tear’ framework and crucial treatment time is lost, for this very treatable condition. Undergraduate training in rheumatology is woefully short, a few days only, but around 20% of the general practice caseload will have a rheumatology cause.

Unfortunately, inappropriate initial referral to Physiotherapy and orthopaedics may also waste valuable time in the RA patient pathway, as the urgency is in getting medical treatment fast. Physiotherapy and orthopaedics still may have a role but at a later stage. Patients respond well to education about their medical conditions and this should be considered as a way forward with posters and information in their doctors waiting rooms. ‘Versus Arthritis’ and NRAS are invaluable patient orientated websites.

In the case of Caroline Wozniacki and anyone with rheumatoid arthritis, if you’re treated early and respond to the drugs, you stand a good chance of getting back to where you were.

To get a consultation, full examination and diagnosis from an experienced Consultant Rheumatologist, please contact Dr Stephanie Barrett’s PA on 020 7730 8508 or use the contact details found here.